My friend Melissa and I booked plane tickets to SE Asia and decided that a week of temple tours and Bangkok hustle would have to be offset by four days of trail running.  In Northern Vietnam. Which isn’t as crazy as it sounds; it only took a few minutes of internet research to get suckered in by pictures of rice terraces, articles titled “9 Must Visit Running Trails In Vietnam Before You Die,” and some ultra-runner Frenchmen’s GoPro pictures from the top of Indochina’s tallest mountain Mt. Fansipan. 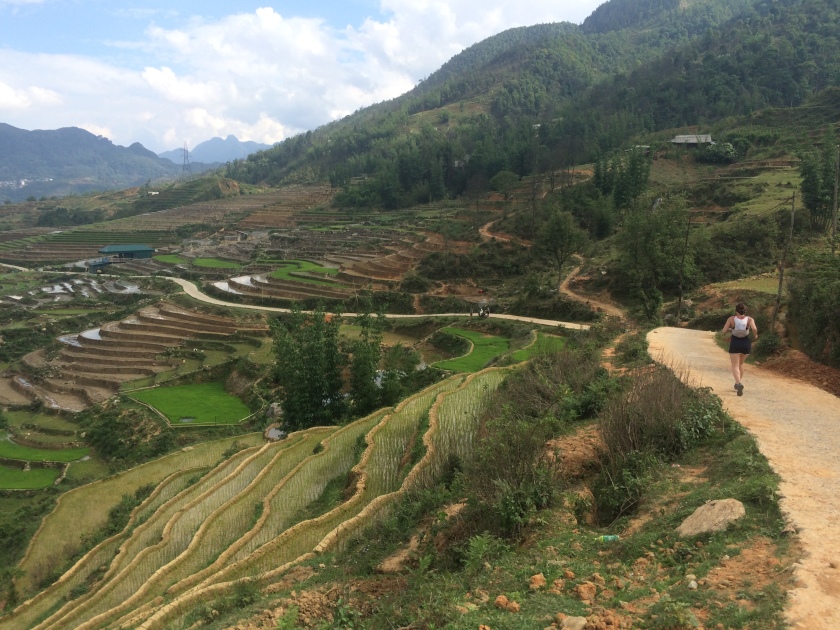 Knowing what I know now, trail running in a remote region of a developing country is a dubious idea.  Luckily, the internet provided just enough blog fodder and vague information (100km Sapa Mountain Marathon; there have got to be trails around there!) to only encourage our misconceived idea.  Combined with our general disregard towards jetlag and monsoon weather, we eagerly signed up for an 8 hour overnight train and hour minibus ride into the far northern corner of Vietnam.  Then we went running for four days.  And it was totally not what I expected.

Trails are few and far between.  Most of the treks are simply transportation avenues between local villages and Sapa.  Sometimes they are busy highways, mostly they are calm single lane roads that were once paved or being re-paved and sometimes there are singletrack style local’s shortcuts between rice terraces.
The trekking infrastructure gives you two options.  As a runner you could hire a guide and arrange to meet them at the destination.  Or you can be self-supported.  Self-supported style as we did it got us running more, but we definitely missed some locals short cuts.  We stopped at the tourism bureau across from the Church and purchased a Sapa map (20,000 VND).  It’s 1:80,000 scale was better suited for motor biking.  But it did have marked trekking routes to Ma Tra, Lao Chai, Ta Phin and Fansipan and gave us a general overview of distance between sight seeing opportunities.
We would do online research on treks and attempt to reconcile between Google Maps and the website’s vague instructions.  Then we’d go back to airplane mode and use the gps dot to see where we were.  We usually weren’t quite were we thought we were, though it’s difficult to say whether it was due to Google Maps or the trekking instructions.
If I were to do it again, spending a day with a guide and doing a homestay would definitely open up some new trails between the rice terraces and valleys.  But until then, I can recommend some very hilly miles on beautiful terrain.  It’ll feel more like a trail run than a road run 🙂

The best thing to happen to us was the scooter.  I kid you not.  The weather forecast predicted up to 12 cm (5 in.) of rain late in the week, so decided to make our attempt on Fansipan the day after arriving in Sapa.  This meant we needed a bike!   We ended up renting off the street corner near the main square and Fansipan ($9 automatic, ‘nice’).  I left my Utah driver’s license as collateral.
Bikes are rented to you on Empty. So the first thing order of business is to head to the gas station. We failed to notice that everyone was just buying a liter of gas and mistakenly filled the tank up ($8). When our 18 mile trip to Tran Tom Pass and back didn’t even drop the needle below Full, we realized our mistake.  Oops, these tiny things are beastly efficient.  Upon returning to our rental lady to let her know we were keeping it another day, I haggled my absolute hardest and was able to talk her down $2 a day since we were going to return it with gas. Even still it became a game to try to use as much gas as possible.
The scooter really did open up a new line of adventures.  I was totally intimidated at first.  As a pedestrian walking the street or riding in a minibus, the motorbikes whiz by at a frantic pace.  However, once you’re on the bike you move with the flow.  Even when my worst nightmare came through and we encountered a semi’s trailer blocking the entire two lane highway as it turned a corner, we simply followed the Vietnamese man in front of us onto the tiny gravel shoulder and waited for the semi to pass.
With the motor bike, we were able to turn some of the longer treks into day runs by cutting off junk miles.  The popular trek to Ta Phin village and cave is 13 km one away. (26 km round trip) We simply hopped on our scooter and cut off the first 6 km by driving down the highway and onto a 10% grade dirt road (so happy to have to run either of those).  We parked our motorbike at the Ma Tra fee station and ran a 8 km of gently winding one lane cobblestone to Ta Phin caves for a 16 km round trip run.
We also were able to explore the steep Muong Hoa valley.  Cat Cat village and Sin Chai were both an accessible run from town, which we did the day we arrived in Sapa.  We also visited the village of Lao Chai which is at the bottom of the steep Muong Hoa valley.  Lao Chai sharply contrasts the trekker friendly road to Cat Cat, it’s super rough and filled with locals zipping around the wash outs.  We were happy to drive our bike the 7 km and not run the steep hills.

When traveling to Asia for business, jetlag is my number one enemy.  I follow strict rules to lessen the effects (fasting, plane sleep schedules, melatonin).  Turns out  our stress-free vacation mindset made jetlag a breeze.  It also helped that I woke up at 5 am the day of my flight and ran up Mt Olympus prior to hopping on my flight to LA.  I slept at least 6 hrs of the Taipei flight.
We used the 4am jet-lag provoked wake up that is all too common with east-bound travel to our advantage.  We had super early mornings planned the first four days of our trip.  Our flight to Hanoi called for a 4am departure from our Bangkok hotel, the overnight train from Hanoi to Lao Cai also arrived at 5am and we chose to wake up at 5am again to start Fansipan.  It wasn’t until our fifth day in SE Asia we ‘slept in’.

This had made me nervous when planning as I was worried between the early mornings, overnight train and stress of travel we wouldn’t be psyched to run.  Nope, even though we averaged 7 hours of sleep (which is really light for me), travel was so stress-free that I was sleeping better than my normal 8.5 hours at home.

Vietnam also wakes up early.  Construction starts early, so sleeping in may be difficult anyways.  We were drowsy by dinner time and sound asleep by 9 pm every night.  We didn’t feel like we were missing out on Sapa nightlife.  There probably was a bar tucked away on P. Cau May, but a Vietnamese drinking culture was not present.  The weekend market in the town square and massages seemed to be the main tourist attractions on Friday night.

Other reasons to run in Sapa:

These all fall into the category of “it’s exciting to try new things”.

You won’t have to eat any of the Honey Stingers you packed (at least while running, but you might when you wake up starving at 5am).

Foreign 7-11s and their generic corner-store equivalents stock new and exciting brands of candy and cookies to try.  You can sample dried Buffalo meat at the market or at road side stands.  On our last day we purchased sticky rice wrapped in banana leaves (imagine a giant tamale) from a Hmong woman on the sidewalk market nearing the lake. It was so big we had to split it, inside of the gelatinous flavorless black rice was a scant amount of fatty pork.  I wish we had sampled these earlier– potentially my new favorite running food.  So portable!  So many carbs!

You’re good to just bring a single bottle on a 9 mile run.

Villages were spaced 3-5 km apart and even between those intervals there were often small restaurants/open markets.  We tended to carry plenty of cash (stashed in different pockets, just in case) and we’d buy a cold Fanta, Coke, water or banana at the terminus of our out and back. Sometimes we’d stop again for a light lunch meal.  It felt good to stop and interact with the locals and spend money instead of breezing through.  This is also how we learned how to dye indigo and got to weave on a loom!

There are many pet dogs and stray dogs in the surrounding area.  None of the dogs in town or around Cat Cat village or Sin Chai gave two shits.  However, while running to Ta Phin we were aggressively charged by two dogs- both coming and going.  It seemed an issue of our speed.  Once we slowed down and walked by, they calmed down.  I wouldn’t necessarily feel the need to bring a lightweight trekking pole, but I would be conscious that there are guard dogs in some of the remote villages and they aren’t used to strangers wearing neon lyrca running by at the impossibly slow speed of 5 mph.

We got a foot massage every single day we were in Sapa.  They ran about 100,000 dong ($4.50) for 30 min. although since it was mid-week and we often went just before our early bird special dinner we’d often haggle for either a price break or upgrade to a 45 min. for the same price.

We knew the Vietnamese coffee would be good (it is) enough to keep our jet-lagged asses motivated and moving, the local honey ginger tea is also not to be missed.  This Sapa specialty is made from fresh ginger slices with an ample dollop of local honey, and is perfect to winding down a meal and helping to stay awake until 8.  — The ‘big box’ grocery store sells Vietnamese coffee makers ($1) and coffee ($2), which make a great souvenir/gift for those who might not be into embroidery and earrings.  It’s located as you walk out of town on Ngu Chi Son somewhere on the south side of the road between the lake and market.
Resources:

One thought on “Trail running in Northern Vietnam”